This week, the Diversity and Inclusion committee is celebrating two scientists that have contributed to the department of Entomology and Plant Pathology. We are highlighting EPP alumnus Dr. Jerreme Jackson and current EPP MS graduate student Amira Cornish for their contributions and impact to EPP and the larger scientific community. Please enjoy reading on these two scientists below: 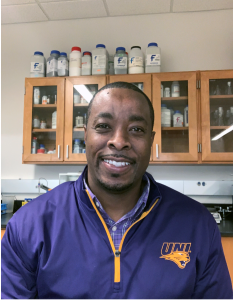 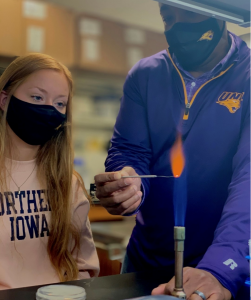 Jerreme Jackson Ph.D., is an assistant professor of Biology at the University of Northern Iowa. Dr. Jackson was born and raised in Lawrence, KS. Like most Lawrencians, he grew up an avid KU basketball fan. Dr. Jackson graduated from the University of Kansas with a Biology major and concentration in genetics. He was quickly hired as a scientist in Xenotech characterizing enzyme activity in immortalized and primary hepatocytes. He then quickly went on as a lab technician with Hill’s Pet Nutrition, where he used genomics and proteomics analyses to characterize the gene and protein expression profiles of canine and feline cell lines treated with novel pet food ingredients. Dr. Jackson wasn’t sure why he went back to graduate school except that while working in a laboratory, he began to ask many questions and wanted to learn more and learn why. This interest motivated Dr. Jackson to start a PhD at the University of Tennessee with the Genome, Science, and Technology concentration; at the age of 28.

At UT, Dr. Jackson’s dissertation work was housed in the Department of Entomology and Plant Pathology (PI, Jurat-Fuentes), and he characterized the role of a protein that induces cell division (α-arylphorin) in the tobacco budworm midgut after it was exposed to a cry1AC toxin from the bacterium Bacillus thuringiensis (Bt). He discovered that when tobacco budworms feed on α-arylphorin, it induces stem cell proliferation and differentiation that reduces mortality when the budworms are subsequently exposed to cry1AC toxin. In other words, he helped to explain that α-arylphorin enabled these caterpillars to survive from ingesting Cry1Ac by inducing regeneration of the midgut epithelium which is damaged in the Cry1Ac mode of action. During his studies, Dr. Jackson became one of five students selected into the Program for Excellence and Equity in Research to receive enhanced professional training in parallel with scientific advancement. Upon graduation, Dr. Jackson was selected as a featured speaker during the graduate hooding ceremony. His message was (1) your ceiling is as high as you are willing to reach, (2) don’t wait on opportunity to knock and to take control of your future, (3) embrace what you perceive as a negative as an opportunity to get better, and (4) refuse to accept less than your best. You can read Dr. Jackson’s speech here (GraduationSpeech).

After completing his PhD in 2015, Dr. Jackson was a postdoctoral fellow in the Microbiology and Molecular Genetics department at Oklahoma State University. As a postdoc, Dr. Jackson investigated the physiology and transcriptional regulation of metabolic pathways during Escherichia coli colonization of the mammalian intestine. It was during this period when Dr. Jackson began to mentor undergraduate students and help them with their research. He mentored 24 undergraduate students of which four received scholarships.

In 2019, he started a tenure track position at the University of Northern Iowa teaching foundational courses in Biology (e.g., Cell Structure and Function). Dr. Jackson’s research program is focused on bacterial nutrient acquisition in the insect midgut. Briefly, scientists in his program characterize host-microbe interactions in the lepidopteran (butterfly/moth) gastrointestinal tract using molecular techniques and elucidate the role of resident microorganisms in conferring resistance to colonization by potential pathogens. He has been recognized for his work with students at Northern Iowa with four awards specifically for his role as an advocate for new and transfer students and a research mentor to seven undergraduate students.

For students interested in pursuing a MS degree or anyone wishing to collaborate with Dr. Jackson, you should email him at Jerreme.Jackson@uni.edu. More on Dr. Jackson’s research is available here. 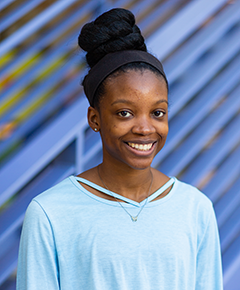 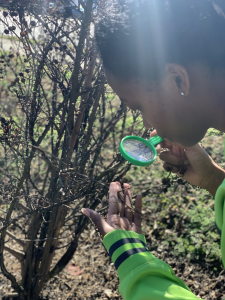 Amira Nailah Kahinde Cornish was born on February 10, 1996 in Columbus, Ohio where she was raised. Amira was homeschooled through 4th grade and enrolled in public school from 5th-12th grade. She grew up participating in competitive cheerleading, basketball, and track. When asked what first sparked her interest in science, she recounted a camp experience where she made ice cream from scratch with the goal of understanding the chemistry behind using salt to lower the freezing point of water, a vital step to making ice cream and keeping our roads drivable during winter weather. After graduating from high school in 2014, Amira was admitted to Spelman College in Atlanta, Georgia which has been ranked as the number one HBCU (Historically Black Colleges and Universities) for thirteen years in a row. During her time at Spelman College, Amira took advantage of several research opportunities to explore her interests in science, specifically Biology. The first project she worked on was researching the psychology of child development. Though she enjoyed the work, she wanted to research more on biological factors which led to her second research project of studying Shiga-like toxin receptor sites in organisms. The last research project she worked on as an undergraduate was researching invasive and non-invasive insects as they relate to natural disasters. This was her first experience working with insects and helped focus her research interests when she was considering graduate programs to pursue.

While finishing her undergraduate career, Amira says the University of Tennessee Knoxville kept coming up in her browsing, and she was very interested in potential projects to work on within the department of Entomology and Plant Pathology. When she visited UT and met with her now advisor, Dr. Jerome Grant, she fondly remembered an outreach event in the UT Auditorium for children to attend to learn about insects. Amira began her graduate studies in the Fall of 2019 and is actively researching how to mitigate Crapemyrtle bark scale (CMBS), Acanthococcus (= Eriococcus) lagerstroemiae (Kuwana), an invasive pest from Asia that is a threat to the ornamental nursery industry, homeowners, and landscapers in the U.S. before it becomes an economic barrier for crape myrtle production and growth. Outside of the actual research she does, Amira is passionate about community outreach and engagement. During her research, Amira is frequently visiting neighborhoods in TN to assess signs of CMBS. This has prompted several opportunities for Amira to share with kids, teens, and adults what she is doing, why it’s important, and answer any questions they may have. 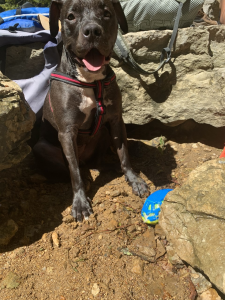 Another perk to moving to Knoxville, TN is being in the Appalachian Mountains. When not hunting in neighborhoods for CMBS, Amira enjoys getting outdoors with her pitbull, Star, pictured left.

More on Amira’s research can be found here