As a part of Hispanic Heritage Month (September 15-October 15), the EPP Diversity and Inclusion committee would like to highlight a família em nosso departamento. But first, know that there are many EPP members that call Hispanic countries their home or indicate these countries as to where they are from. You can learn more about where your EPP colleagues are from by viewing the map on our website.  Note, we will update the map again in January 2022, so please be on the lookout for that email!

Dr. Caroline Placidi De Bortoli started working in the Insect Physiology laboratory led by Dr. Juan Luis Jurat Fuentes as a post-doctoral associate in 2017. After meeting Dr. Jurat Fuentes at a conference, she was offered a position at UT to work on resistance to Bt toxins in fall armyworm. She started identifying and detecting a resistance mutation against transgenic corn in fall armyworm from Florida, but also contributed to efforts using next generation sequencing to monitor for this allele. In the past year, she has been working on research collaborations with companies focused on developing new transgenic crops targeting tropical pests and insecticidal RNA interference (RNAi) to control lepidopteran pests. So far while at UT, Dr. Placidi De Bortoli has authored three publications and a fourth publication is in preparation.

Dr. Rafael Ferreira Dos Santos joined as a volunteer in the lab working on multiple projects and began as a post-doctoral fellow in 2019. He performed research studying the migratory tendency of fall armyworm after feeding on diet containing a Bt toxin, and then transitioned to insecticidal RNAi projects in collaboration with industry partners. In these RNAi projects, Dr. Ferreira Dos Santos developed bioassay protocols and tested prototype dsRNAs for use in control of fall armyworm. Results from his work were used as preliminary data in a recently funded NSF SBIR proposal with Agrospheres. He is beginning to work on this project to advance these RNAi pesticides to greenhouse and field testing. Rafael has also been critical in maintaining Colorado potato beetles strains resistant to RNAi in the greenhouse.

Dr. Jurat Fuentes couldn’t be happier with Drs. Placidi De Bortoli and Ferreira Dos Santos and shared that “it has been amazing to have them in the lab. Apart from their hard work, they are both very responsible, organized, and good at overcoming research problems. On the more personal side, they are both very sweet, honest and super friendly and welcoming to others. They are always ready to lend a hand to anybody in need of their assistance and are great team players.”

Caroline and Rafael agree that they “couldn’t have ended up in a better place! We love it here!” Outside of the laboratory, Rafael and Caroline like outdoor activities (e.g., hiking, kayaking, swimming, camping), having a barbecue at a park, and exploring places they have never visited. Both recognize that their stay in Tennessee may not be forever, so they are trying to “make the most of our opportunity and to do as much as they can.”

One of their favorite things to do is to take their daughter, Rafaella Santos De Bortoli, to the playground. As many soon-to-be parents know, choosing a child’s name is very difficult, and it was this way for them. Traditionally, when a child is born in a Latin-American country the child receives both their father’s and mother’s last names. This is important because last names represent heritage and two people. Also, using two last names keeps a mother’s lineage and keeps her alive and equal. A person can then “easily” look back through many generations from both families to see relation. In the US, many Hispanic Americans choose to hyphenate their last name to keep the maternal lineage because often the space is omitted or overlooked (and it is an easy way to be called by the right name). Like other families, Caroline and Rafael also kept both of their parents’ last names (Placidi De Bortoli and Ferreira Dos Santos). Since Rafaella is an American citizen, Caroline, “did not want her to feel different or to have problems with misnaming like we do.” Their solution was to give Rafaella one last name recognizing Caroline’s family (De Bortoli) and to honor Rafael and his lineage, Rafaella received his last name as her middle name (Santos). 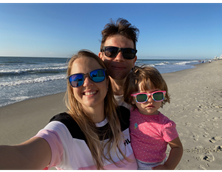 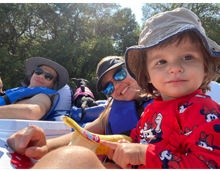 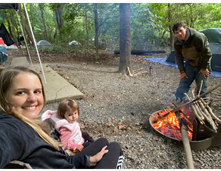 Hispanic Heritage month recognizes the achievements and contributions of Hispanic peoples and occurs during the celebration of independence of many Latin countries. In Brazil, Independence Day is September 7, and is marked by patriotic displays and military parades in most Brazilian cities. In the capital of Brazil (Brasília), the national celebration takes place at the Ministries Esplanade with a civil-military parade in the presence of the President, who is Commander in Chief of the Armed Forces. Caroline and Rafael normally “celebrate the day with barbecue, dance, and music.” They miss the “get-togethers with family and friends where we enjoy barbecue, music, drinks, and pool time. Brazilians are very welcoming and loving people; we are well known for our cordiality, excitement, amicability, and warmth. Therefore, we miss this a lot.”

Another example of the importance of names and culture comes from Spain. Dr. Juan Luis Jurat Fuentes = Juan Luis (first name) and Jurat Fuentes (last name). Juan was his maternal grandfather’s name and Luis was his paternal grandfather’s name; so, his first name is Juan Luis. Jurat is the first last name of his father (Jose Luis Jurat Perez) and Fuentes is the first last name of his mother (Luisa Isabel Fuentes Anaya). When Dr. Jurat Fuentes first moved to the US, he kept telling people his name (Juan Luis), but many people thought Luis was his last name. So, he began to use Juan, even though he prefers Juan Luis. He also tried to use his full name (aka his name: Juan Luis Jurat Fuentes), but often people thought he was referring to two different people (Juan Luis and Jurat Fuentes). So, he began to hyphenate his last name for simplicity (Jurat-Fuentes). He wants to use his full name and loves it, “because it is a way to fully embrace my family and ancestry. When someone uses “Juan Fuentes” it is an oversimplification that does not fully represent me.”

As EPP has indicated in surveys and socials, we love food and new recipes! So, we asked Caroline and Rafael for a recipe to share and below is a recipe for Classic Brigadeiros. This chocolate dessert was first created in Rio de Janeiro and is a loved treat throughout South America. It is a “a fun recipe, and everyone loves it! Especially kids. Brigadeiros are always present at birthday parties. Birthday parties are not birthday parties without Brigadeiros. We always have cake and Brigadeiros.”  And Juan Luis adds that he thinks “the whole lab can attest to how amazingly good Caroline’s brigadeiros and desserts are.” 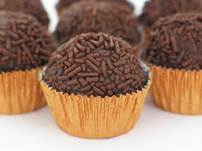 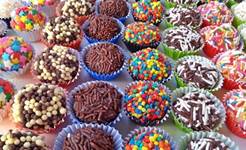 Images above, left to right: Classic Brigadeiro, different versions, and cake with Brigadeiros.

1.      In a pot over low heat, melt the butter, condensed milk, and cocoa powder, stirring continuously until you can see the bottom of the pot for 2-3 seconds when dragging a spatula through.

3.      Shape and roll the chilled mixture into balls.

*There are many different versions and you can substitute the cocoa powder with many different options (e.g., coconut, peanut butter, powdered milk, chopped strawberries).