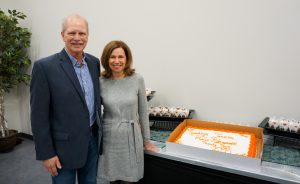 Dr. Frank Hale and his wife at the 2021 Winter Banquet

Dr. Frank Hale grew up in Wilmington, Ohio. As the son of a general surgeon and naturalist, it was only “natural” for Frank to pursue science. He began on his entomology journey in the 1970s at the University of Cincinnati after meeting Dr. Tom Wood, an expert in Membracidae (treehoppers). He eventually accompanied Dr. Wood and his former classmate, Dr. Glenn Morris, who studied Tettigoniidae (katydids), to Costa Rica in 1976. During the day, he was learning treehoppers with Dr. Wood while at night, he was learning katydids with Dr. Morris. This is when Dr. Hale recalls he officially caught the “bug” of entomology.

Dr. Frank Hale finds Extension entomology to be very gratifying. His co-workers and colleagues have been very supportive and taught him a wealth of knowledge over the years. He states he still learns something every day in entomology, so he’s never bored. These past years, he’s been busy with the abundance of invasive species. It is no secret that we will be needing more entomologists and plant pathologists to help control this ever present problem. 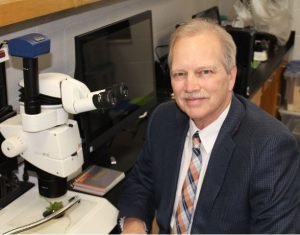 Dr. Frank Hale sitting in front of a microscope

Dr. Hale has found the lack of time and funding to be some of the biggest obstacles he encountered while addressing the damage caused by invasive species. However, he has recently answered a question that had plagued him for years: how do crape myrtle bark scales spread so quickly once introduced into a neighborhood? Afterall, they’re slow moving and not exactly the most mobile insect. It was thanks to Dr. Jerome Grant’s former graduate student, Amira Cornish, with the help of Dave Paulsen that they were able to answer this problem. This past spring, they had discovered that the crawlers can be blown in the wind, allowing them to land on nearby crape myrtle trees. He said they even found them as far as 45 feet away.

We asked Dr. Hale if he had any imparting advice for those who wished to follow in his footsteps as a successful entomologist. Here is what he had to say:

“Do the best you can each day and you will be amazed at what you can get accomplished in a year.  If you do good work, you will be given more responsibilities and you will not have any problem being promoted and advancing your career.  Try to be active in professional societies and collaborate as much as possible.” 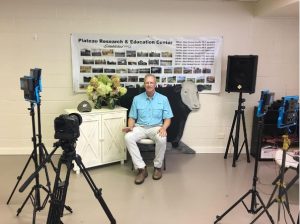 Dr. Frank Hale recalls when entomology was just a pastime of the idle rich; he feels very fortunate to be paid doing what he loves as an entomologist.

In his pastime, Dr. Hale enjoys singing with his wife in his church choir. As he approaches retirement, he is eager to have more time enjoying a good book as opposed to emails. He also is an avid hiker, cyclist, traveler, and flyfisher. Beyond these, he plans on learning how to play the ukulele and how to tie a fly that will drive the fish crazy. It sounds like he’ll still be just as busy in retirement as he was working!

Dr. Alan Windham says that Frank is one of a kind. He often calls him the “Iron Man of Entomology”, because he covers so many areas of the field and does it so well. He recalls that it has been a genuine pleasure working and travelling with Dr. Hale for nearly 30 years. Dr. Windham is correct in stating that Frank will leave a void that will be difficult to fill. We are beyond proud of what Dr. Hale has accomplished during his career. We hope he enjoys his much deserved retirement!