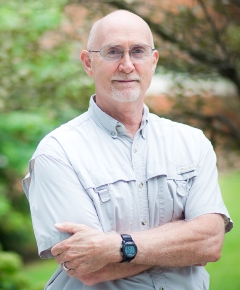 Parkman stated that one of his greatest achievements was serving as Director of Lindsay Young’s Beneficial Insects Laboratory. Dr. Parkman has served as Director for the last fifteen years. The focus of LYBIL is to mass rear predators of the hemlock wooly adelgid, an invasive and deadly pest of hemlock trees, which was first discovered in East Tennessee in 2002.

To combat this pest, Parkman and his lab provided the Great Smoky Mtns. National Park with over 364,000 beetles from 2007 to 2021. During that time he also released more than 450,000 beetles at more than 240 sites in the Cherokee National Forest, the Cumberland Gap National Historic Park, and several state forests, parks, natural areas, and wildlife management areas. These beetles have established at several sites in the Smokies and at several other locations and appear to be spreading beyond the release sites. To accomplish this he obtained over $2.6M in external funding. About his time as LYBIL Director Parkman said “I am extremely grateful for this position that has allowed me to continue working in the field of biological control, and to visit and work in some of the most scenic areas in Tennessee.”

In Parkman’s free time, you can catch him playing the guitar and dobro, or hiking and backpacking in the mountains of east Tennessee.