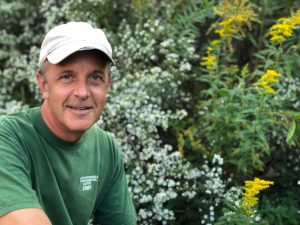 Jesse Webster grew up in Greene County, Tennessee, a county that he said is known for its strong foundation in agriculture and natural resources. As matured in a city surrounded by mountains and valleys, his parents took him hiking and hunting. Little did they know, it would put a lasting impression on his path in life.

Webster now holds a full-time position with the National Park Service and is a current master’s student with a concentration in Entomology. It is a hefty workload, but with the help of his primary advisor, Dr. Jerome Grant, Jesse stated that he is building a “rock-solid foundation in EPP”. When asked about his coursework, he mentioned that he had recently completed Adult Insect Taxonomy, which is taught by Drs. Moulton, Bernard, and Phillips and that he was currently taking Statistics in Biological Systems with Dr. Fordyce. “Both of these courses have been a great addition to my final project and future career” he declared. 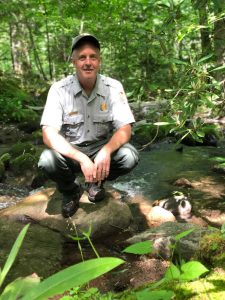 The Department of Entomology and Plant Pathology offers an M.S. degree with thesis and non-thesis options. Here is what he had to say about the program:

“As a student enrolled in the EPP’s non-thesis program, I have been given an opportunity to upgrade my knowledge in current research topics and skills that will make me more effective in my current position as a forester for the NPS and as a community member. I’ll also be better able to compete for future job opportunities with various land management agencies. There are so many talented students and professors that are a part of the department and the international diversity that they represent is a strong benefit to the University. They really care about the meaningful work that is getting done.”

Considering his experience in the Smokies and focus area, Webster was involved early on with a large stream restoration project in the Abrams Creek area of the park. “The group that I work with, the Resource Management branch, took a leading role in this multi-year process. Initial results from this work showed many positive outcomes from converting a once degraded stream to a more natural hydrologic and biological system; one that benefits not only the park but the surrounding community as well.” His current project involves using macroinvertebrate samples, Mayflies and Stoneflies, that were taken prior to and after the work had been completed. Jesse communicated that by doing this, they could more precisely gauge the long-term recovery of the system as they are excellent indicators of stream health. 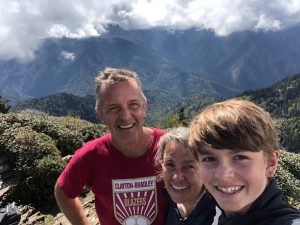 The Webster family in the Smokies

With his family by his side, Jesse continues to be involved in community-supported agriculture and environmental education, volunteers with the Little River Watershed Association, and advocates for local policies. Webster’s favorite thing to do is spend time with his family. Continuing the family tradition, Jesse, his wife, and their fifteen-year-old son spend time together by hiking in the Smoky Mountains, canoeing on the Little River in Walland, TN and gardening.