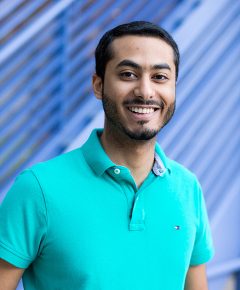 After graduating from The University of Tennessee with a bachelor’s degree in computer science, Abdullah Almsaeed joined the Department of Entomology and Plant Pathology (EPP) as a Web Developer and Research Associate.

His interest in software development began at a young age. “I started learning computer programming as early as twelve years old” he stated. Abdullah grew up in Saudi Arabia and explained that during this time it was difficult for young residents to find opportunities to learn about computer science. He then continued with a little more detail about his backstory. “Because of access to the Internet, however, I managed to become a self-taught developer who created and sold his first software by the age of fifteen. Since then, I became determined to continue my education at a university in the United States and major in Computer Science.”

In his role at EPP, Abdullah leads the development of multiple web and mobile applications that aid scientists in collecting and analyzing data. He explained that working with emerging technologies and managing multiple applications on different platforms requires a wide range of knowledge. It can also be challenging. “I always dedicate time every month to read and learn about new advancements in the field” he stated. 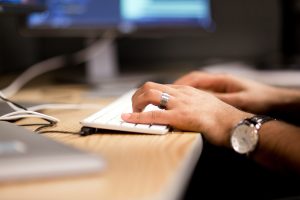 He also spoke of his greatest achievement at EPP. “Gaining the reputation that we currently have with our stakeholders of being able to interpret their needs and translate it into an intuitive functioning software all while delivering new features at record speeds is, in my opinion, a great achievement. Bridging the communication gap between stakeholders, who often don’t have a programming background, and software developers take a lot of effort and require a deep understanding of the other side’s work. Doing this over five or more different software applications is even more challenging.”

When asked if he had any advice to give to others that were interested in the field, Abdullah explained that one should never give up. “In the field of computer science, like many other fields, it can be really frustrating to get started. In the beginning, everything seems complex and difficult to learn. Don’t let that discourage you. It gets easier and more pleasurable every day.” He also mentioned that one should never stop learning new technologies and always continue exploring new concepts. “My favorite website to get new developers acquainted with the technology stack we use is Laracasts.com. It provides a great set of courses for all levels from beginners to experts.”

As family is also important to Abdullah, he cherishes the time they spend together. “I am a husband to a wonderful wife and a father to a beautiful one-year-old boy. Their presence in my life has been a great source of support.” Abdullah also expressed how he makes homemade meals for his friends and family after work. “Cooking is my favorite hobby” he declared. “It’s especially pleasurable when I get to cook Middle-Eastern food for people who have never tried it.” Along with cooking, Almsaeed also enjoys engaging in flight simulation experiences. “It is exciting to learn how to fly a commercial airliner in a real-world setting”.

Almsaeed would like to thank his family and team for their support. “I work with an awesome team led by Dr. Margaret Staton, and I believe I wouldn’t have achieved my goals had it not been for the support of my team and my family. I’d like to thank everyone who supported me in my journey. Especially my wife, Sarah, who stuck with me through it all.”